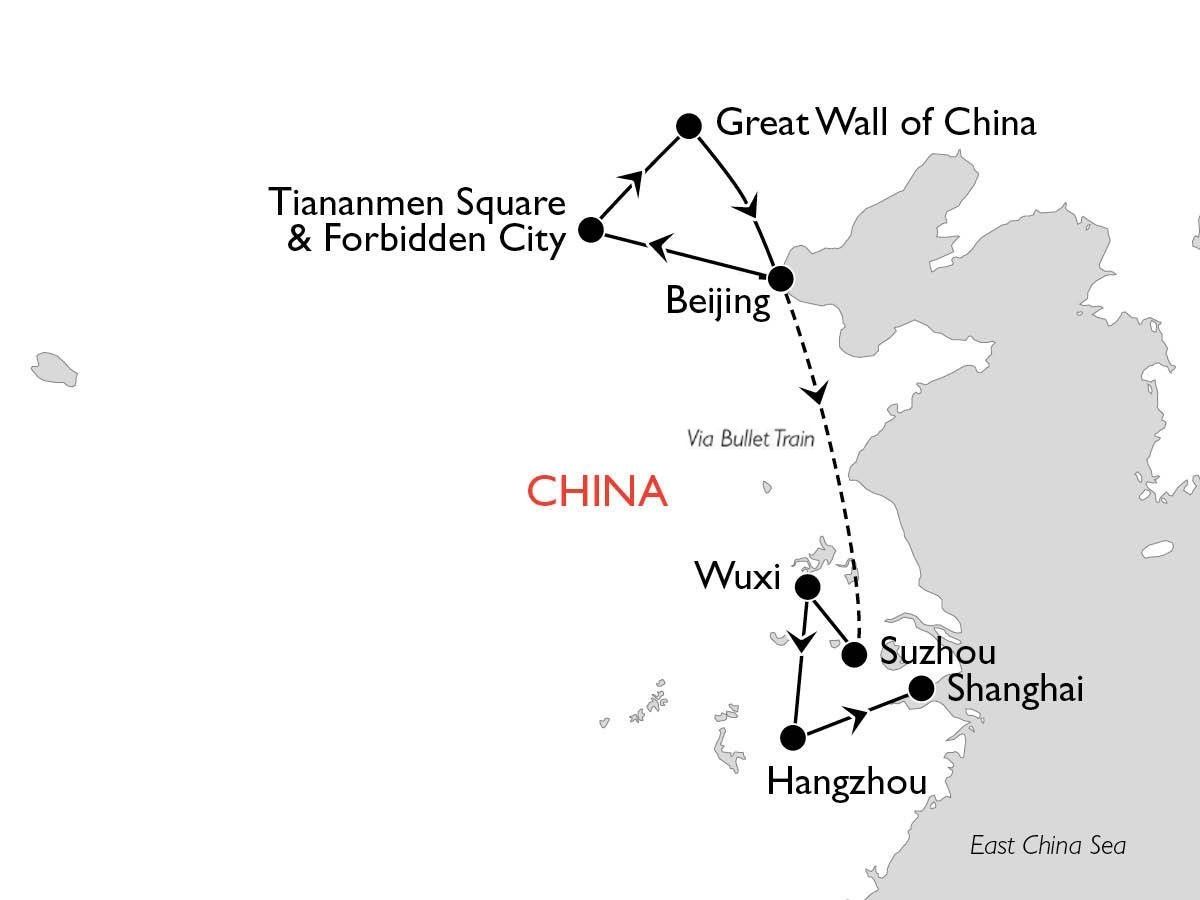 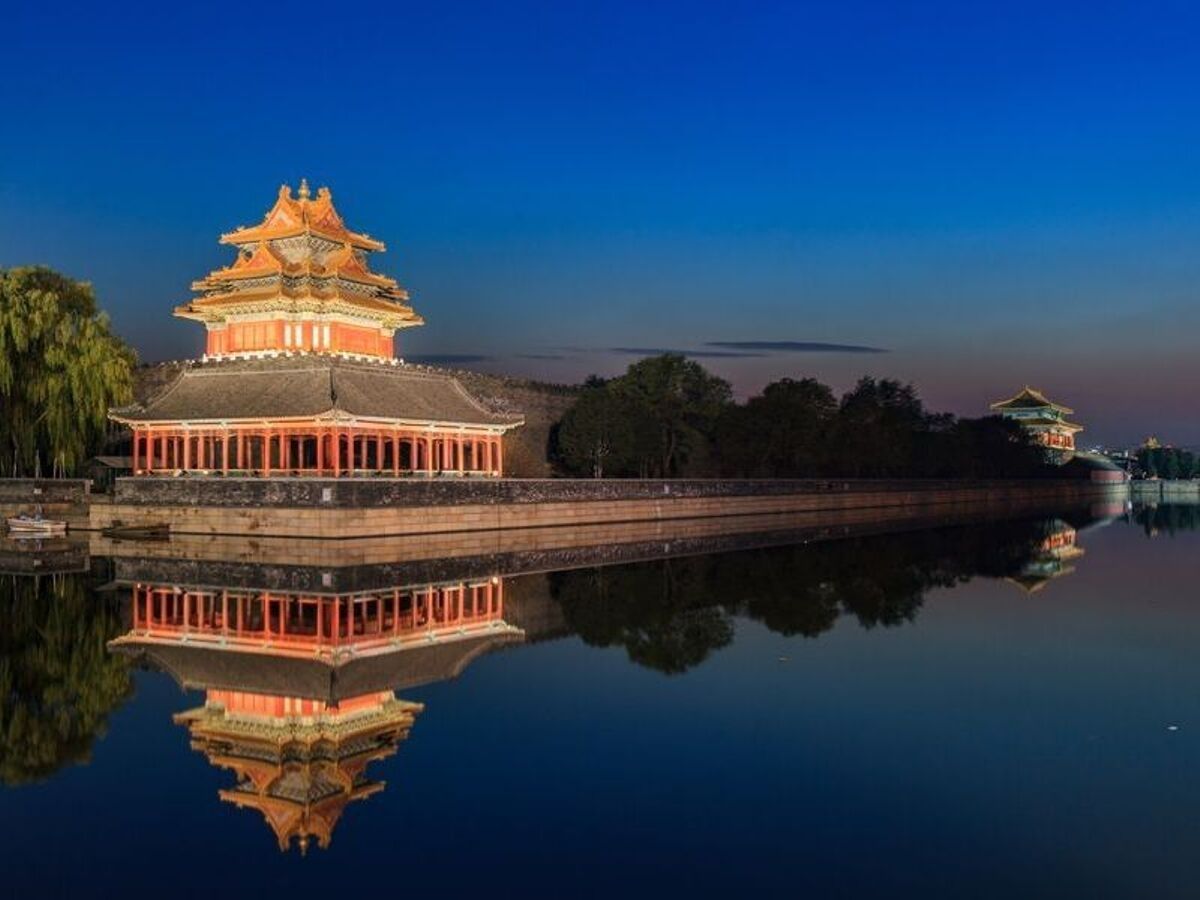 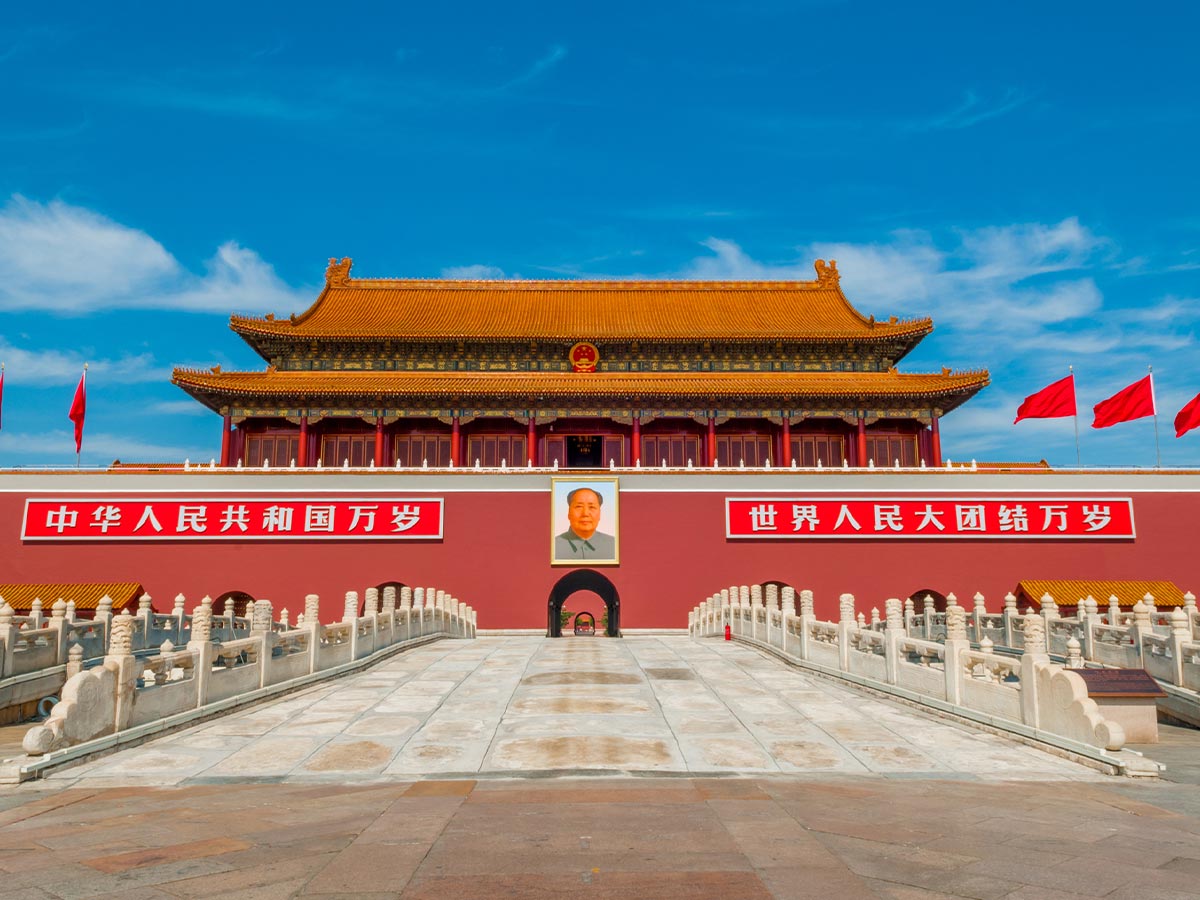 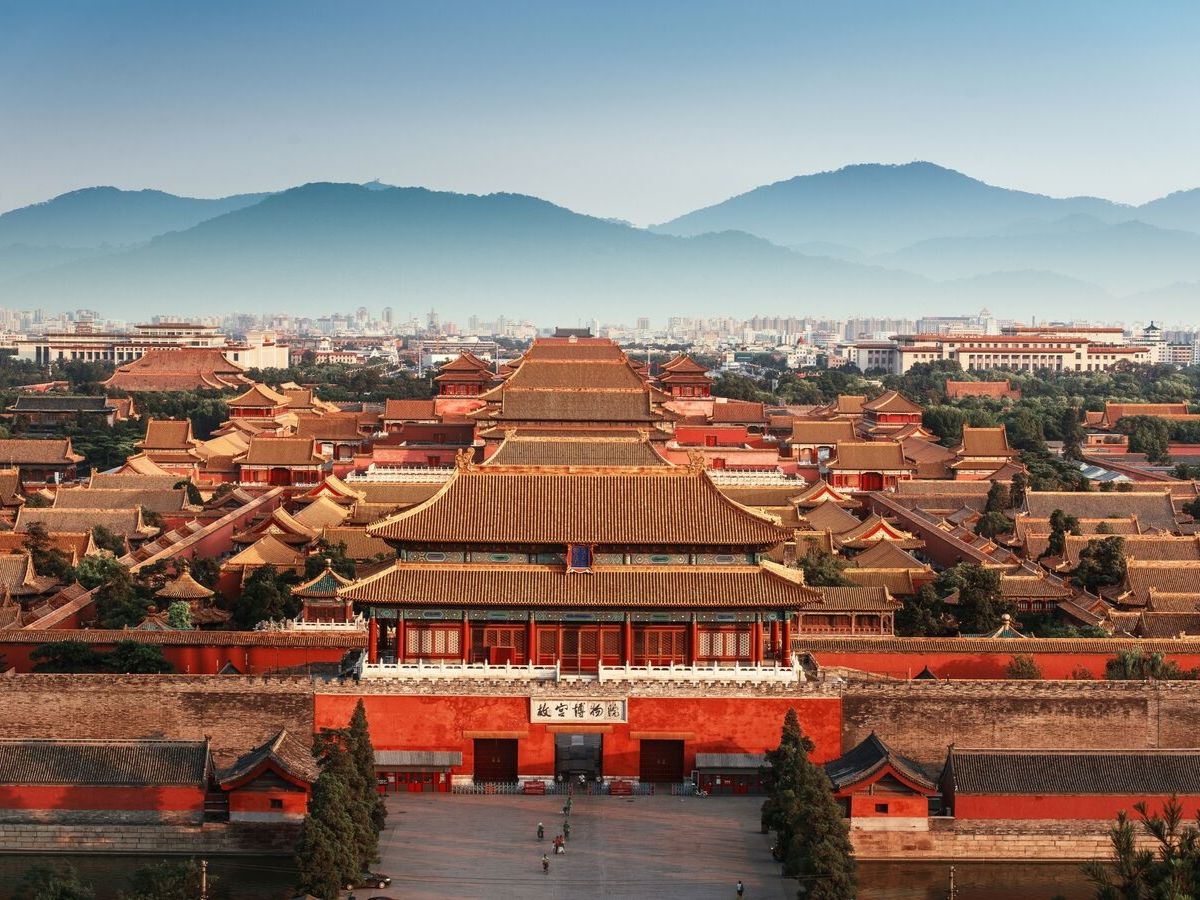 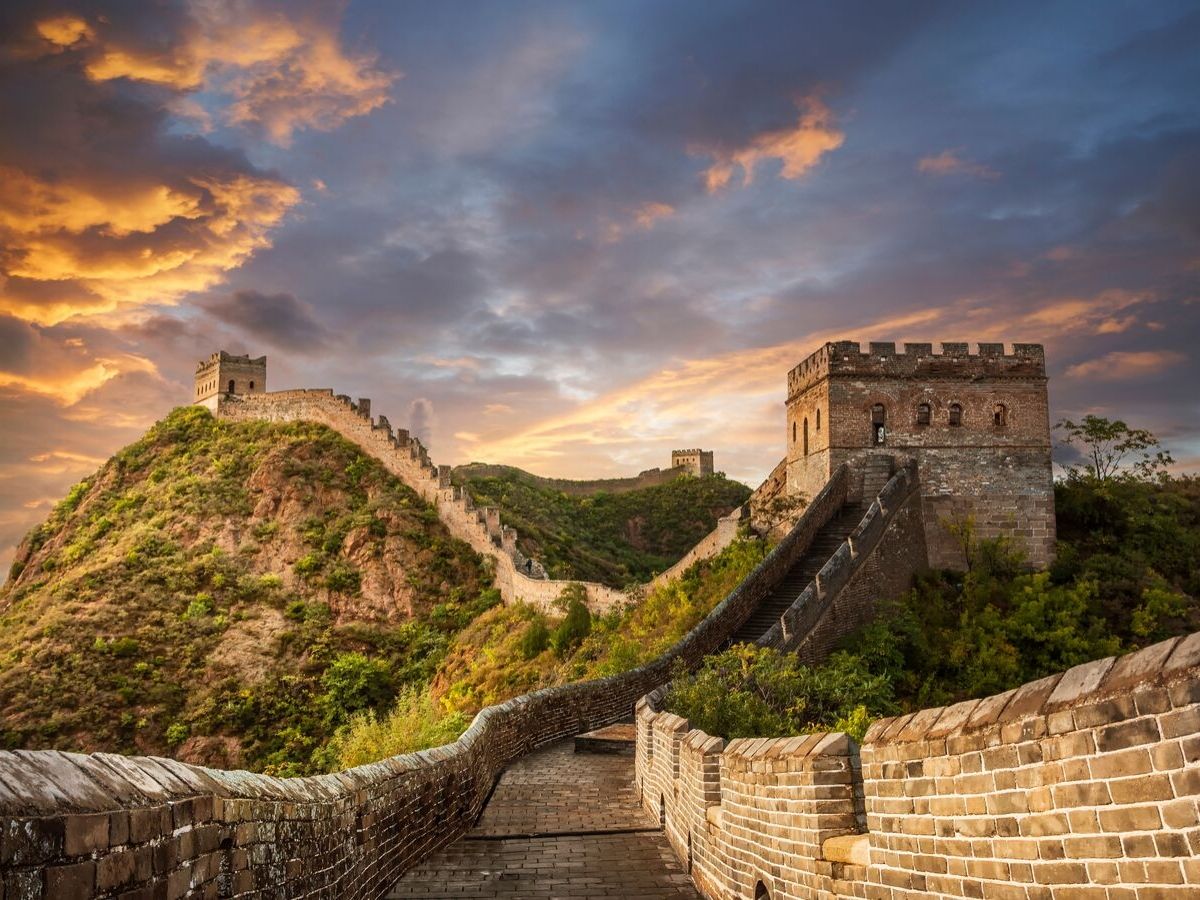 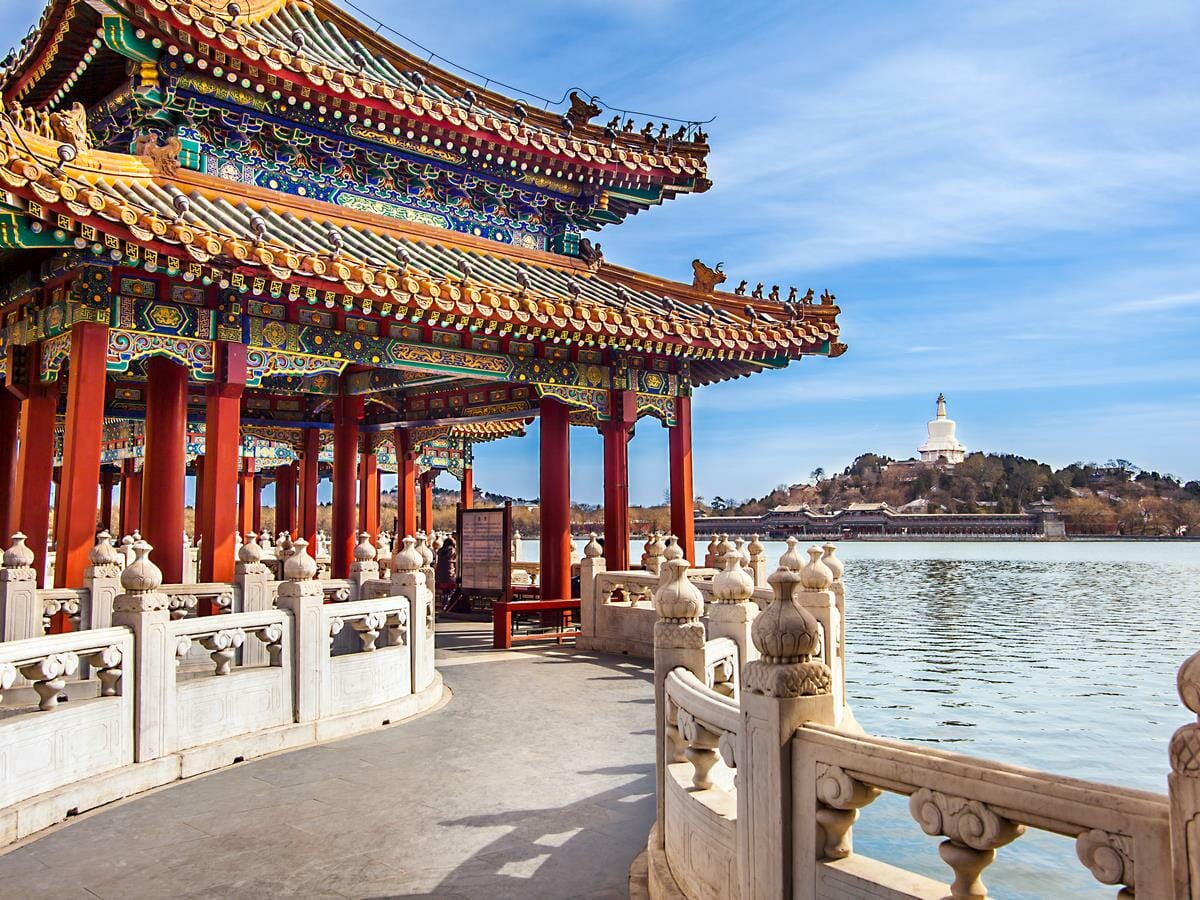 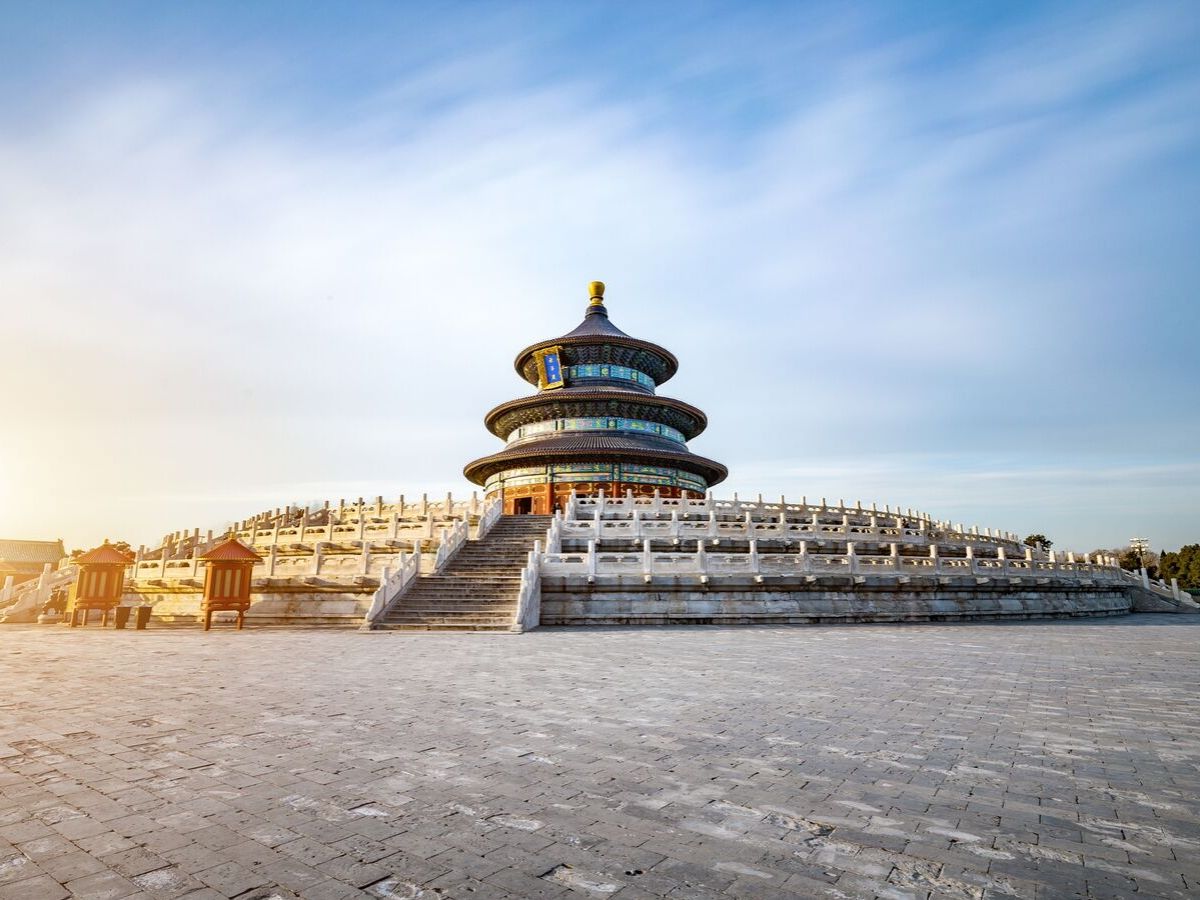 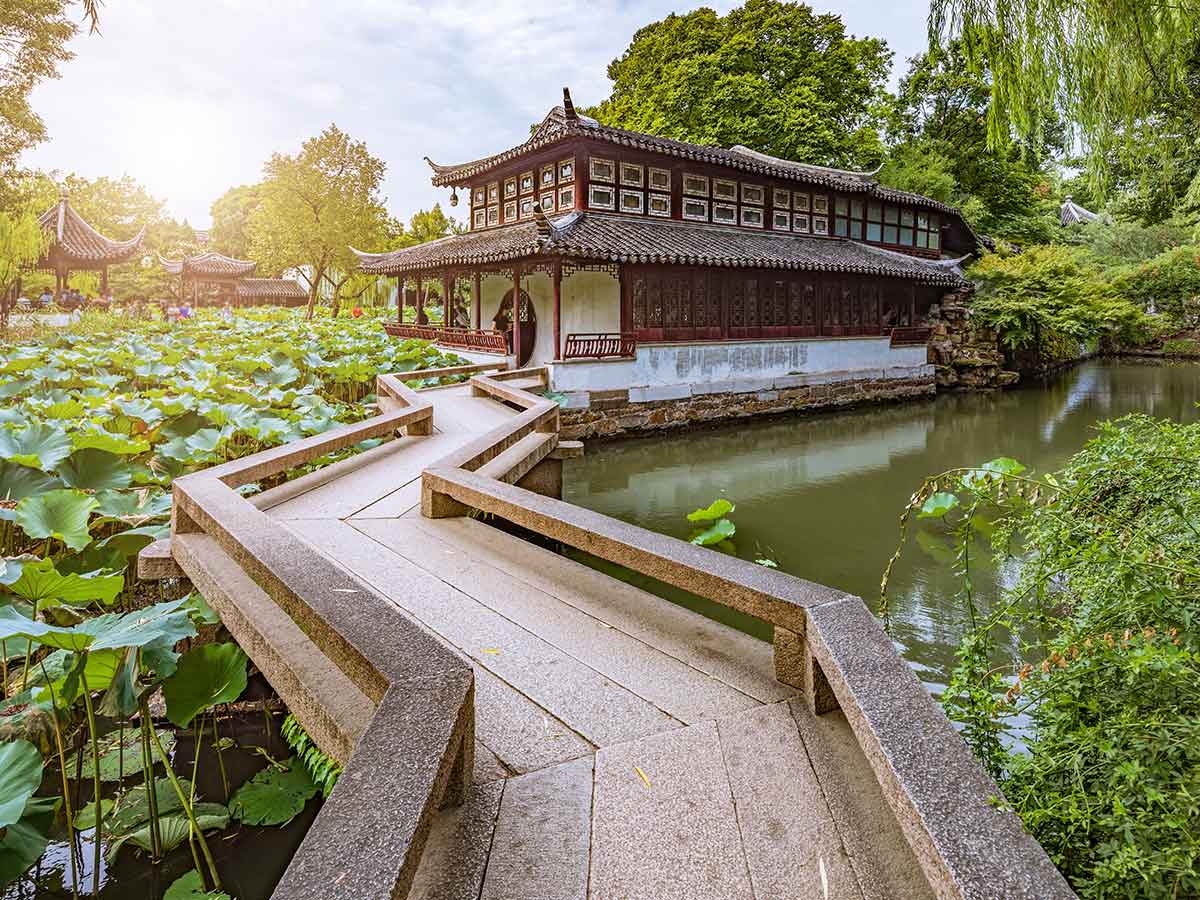 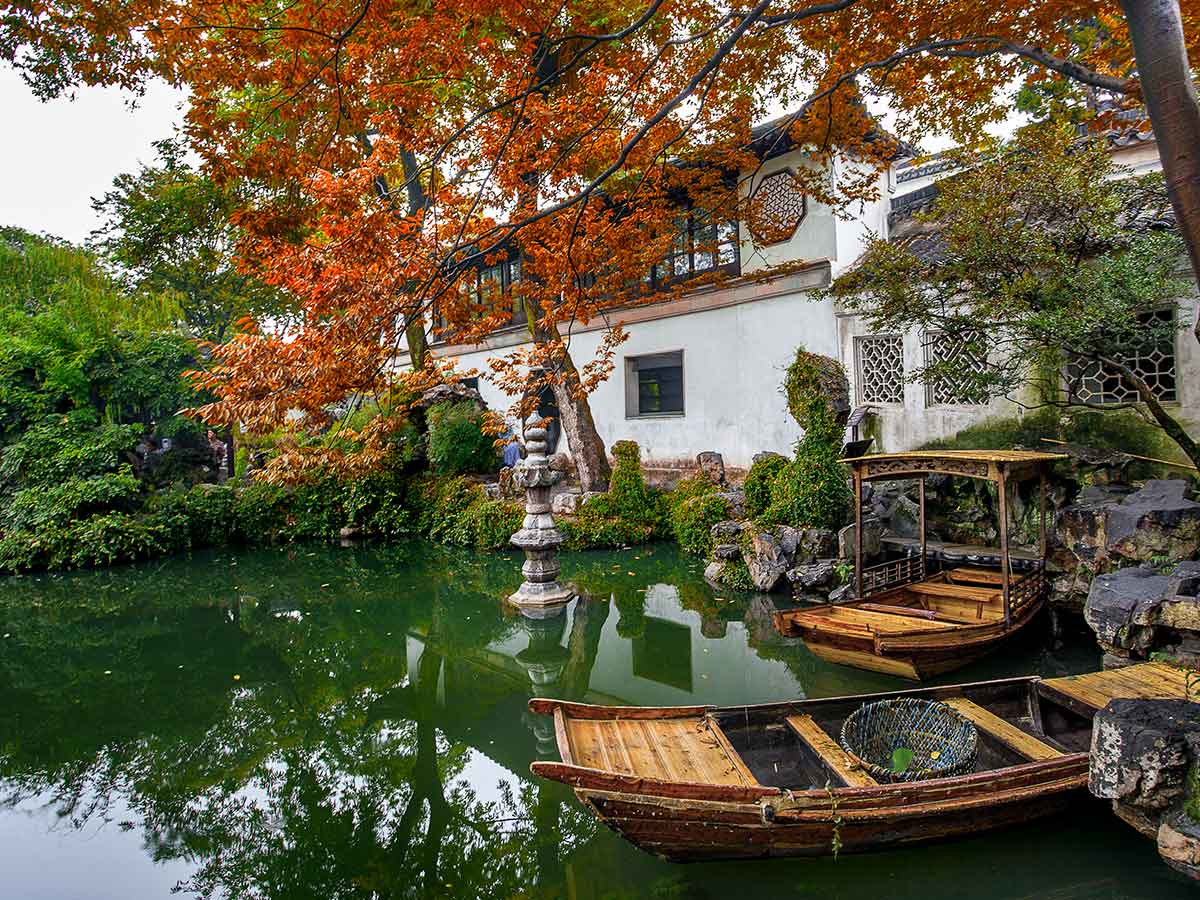 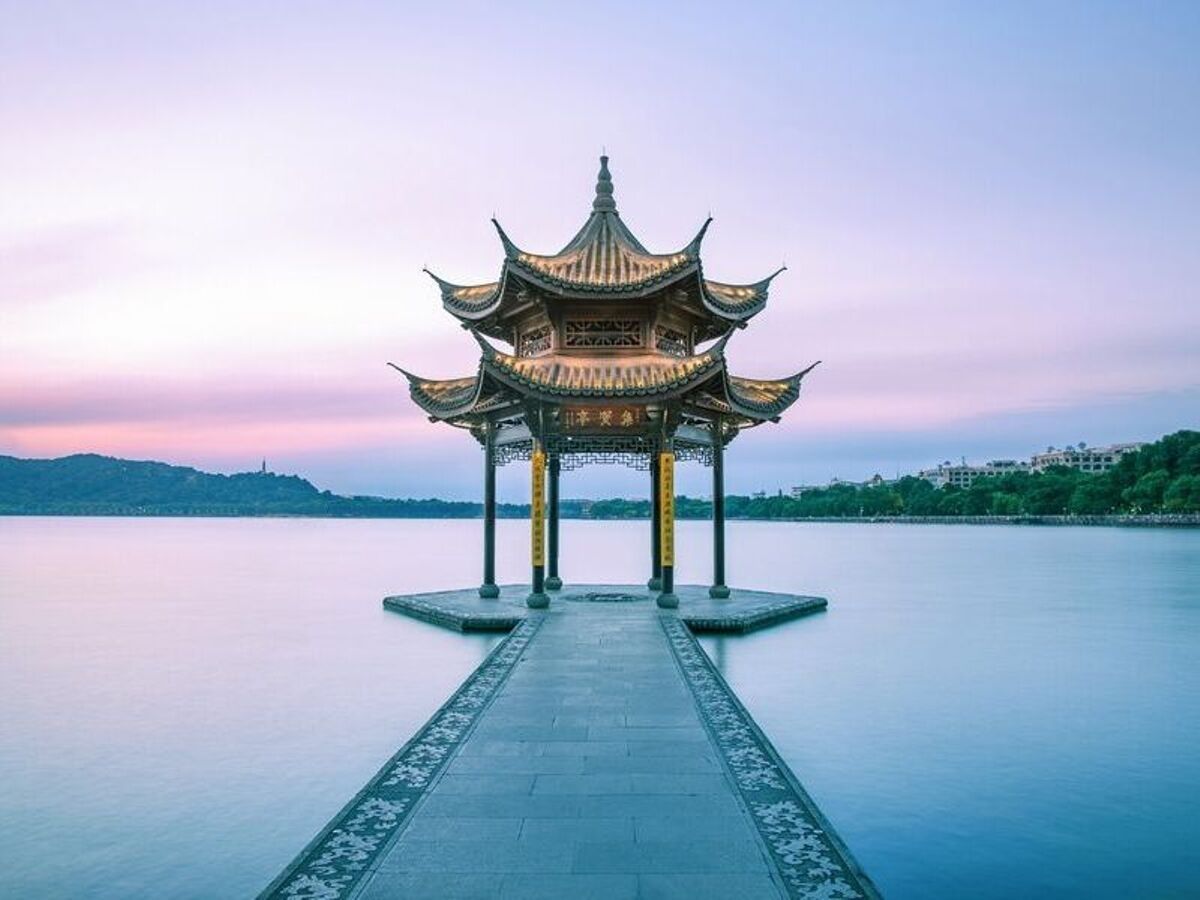 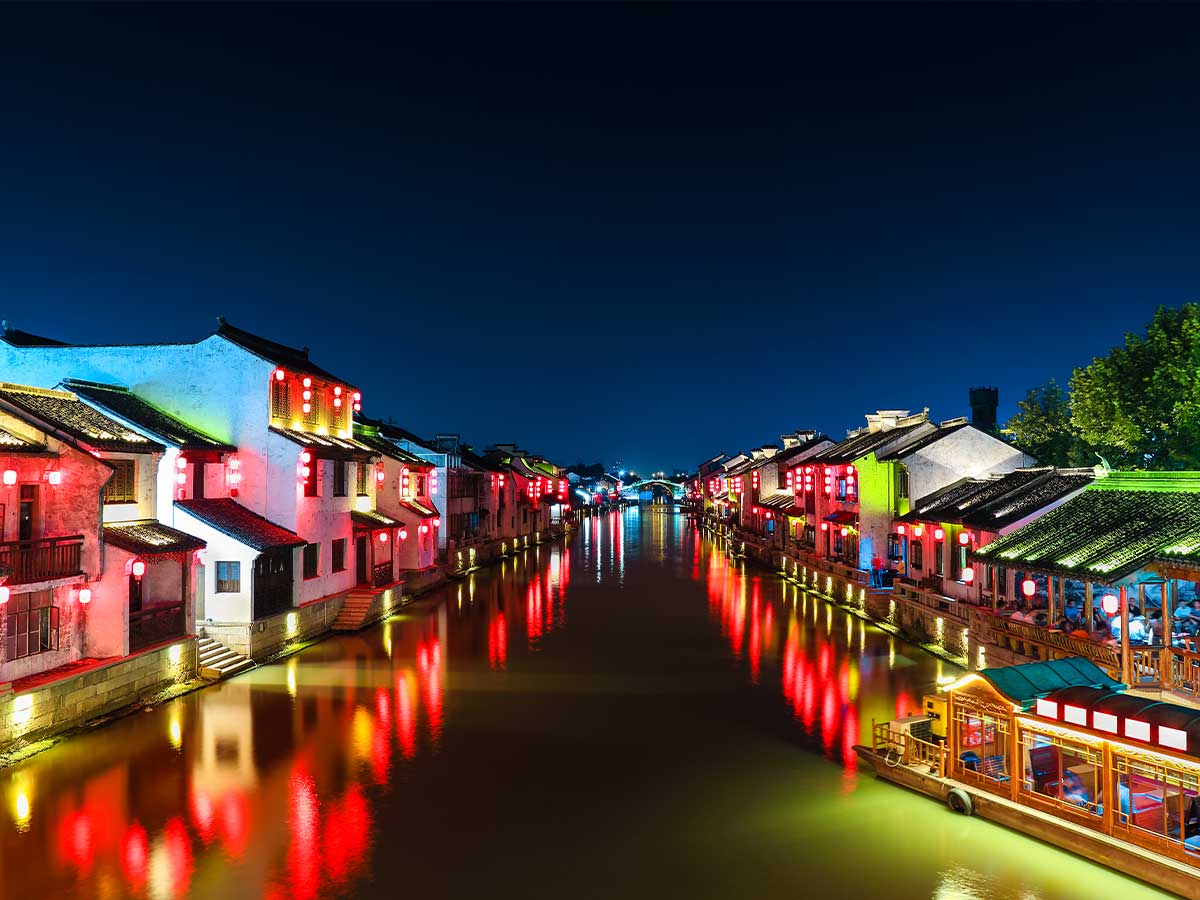 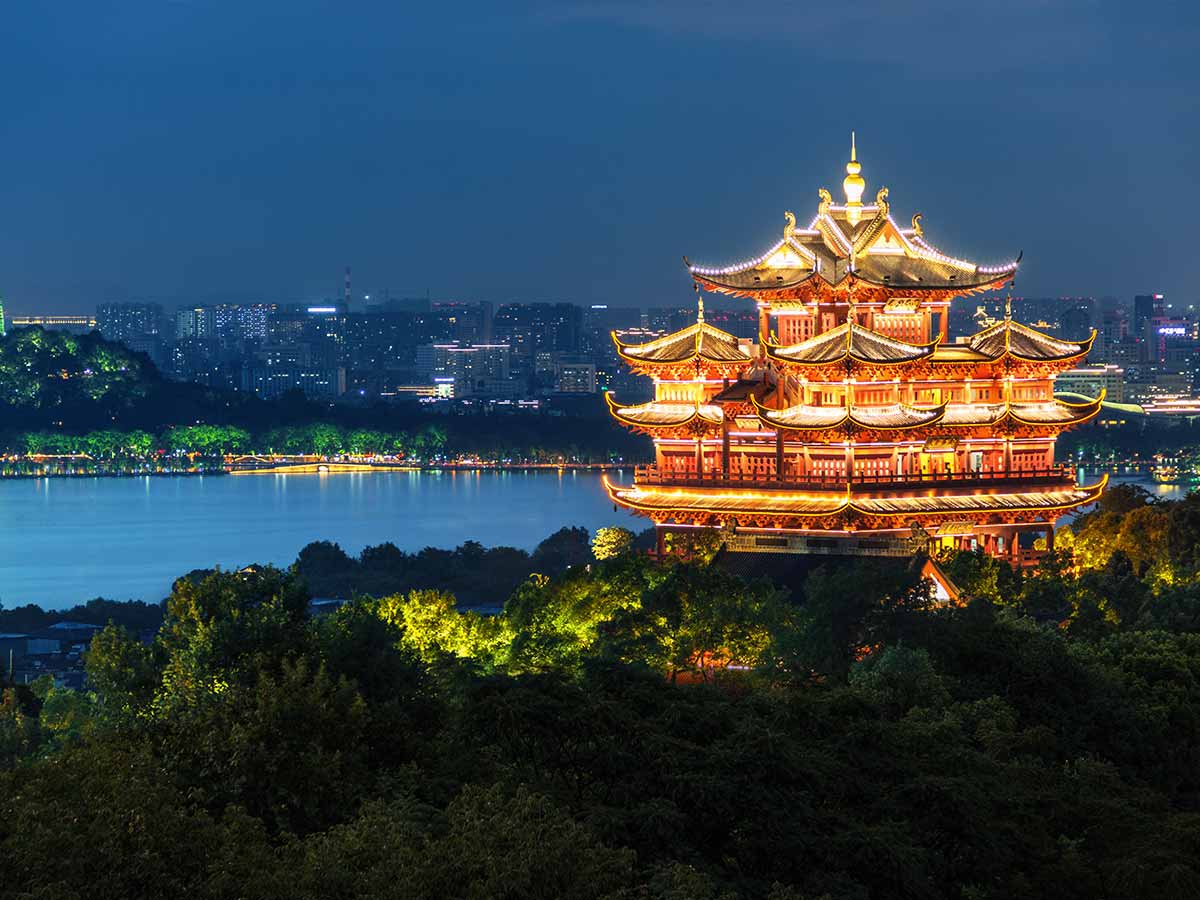 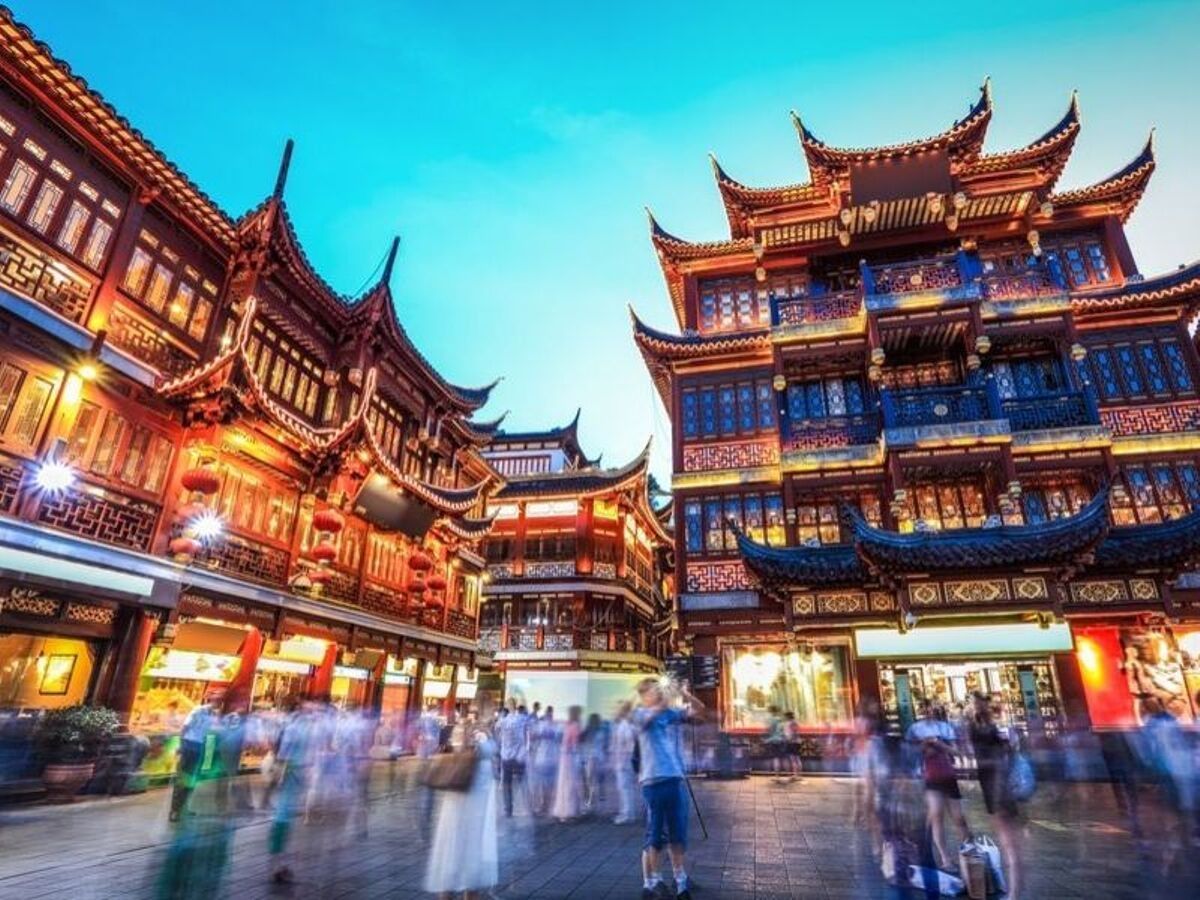 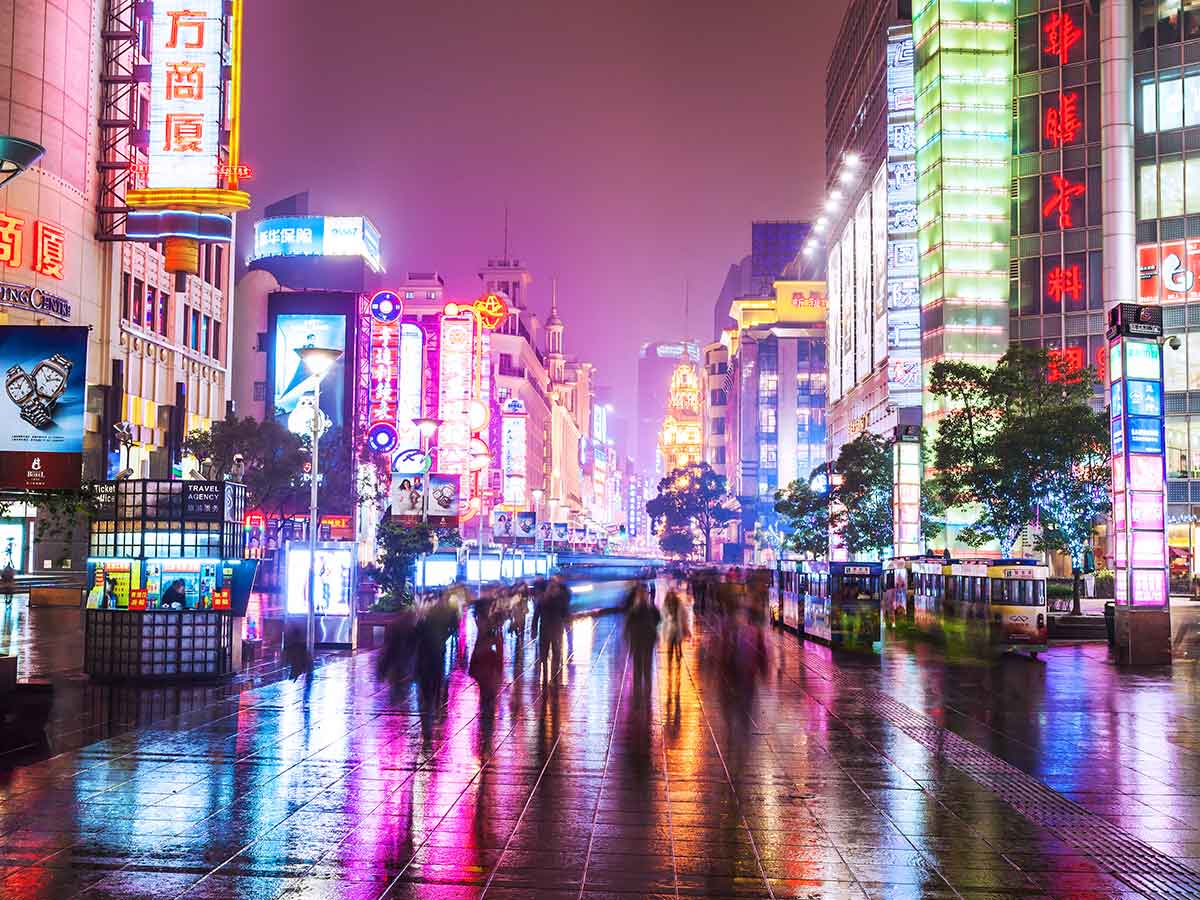 We’ll get you to and from your holiday with no troubles – all you need to do is pack your bag and make your way to the airport! Enjoy return airfares with a full-service carrier included in the price!

Tick off all the experiences on your China bucket list on this epic tour! Not only will you step on to the Great Wall and get lost in the Forbidden City and Tiananmen Square, you’ll also be dazzled by a beautiful jade, pearls and silk, chilling in Suzhou’s Lingering Garden and Li Lake Park, wandering The Bund and sipping Longjing Tea while floating along West Lake. All this, plus you’ll understand more about Traditional Chinese Medicine and get around on a high-speed Bullet Train! China bucket list accomplished! Your tour includes English-speaking tour guide(s) throughout your time in China!

Enjoy a total of 8 nights accommodation during your tour. Your stay is sorted as you make your way through China this holiday.

Feast on a delicious breakfast every day when you pull up a seat for breakfast during your tour! For more information check out the itinerary!

The last thing you want to do on your holiday is stress about how you’re going to get from A to B in China. With us, you won’t have to worry! Enjoy airport and group transfers on us this holiday!

See more this holiday with $200 credit per booking towards the purchase of any of our two tour extensions, explore the Terracotta Warriors or the Yangtze River.

Day 1: Fly from Australia to Beijing

Upon arrival, a tour representative will meet you at the airport and transfer you to the hotel. Note: Some flights may depart one day earlier.

Visit Tiananmen Square, one of the largest public squares in the world and the venue of the infamous 1989 Tiananmen Square demonstrations. Acclaimed as the ‘Gate of Heavenly Peace’, it is the foreground to the Forbidden City, a UNESCO World Heritage Site. Otherwise known as the Imperial Palace Museum, the Forbidden City is the citadel of China’s last 24 Emperors during the Ming and Qing dynasties, and was the political and ritual centre of China. Cap off the day with an opportunity to attend a legendary large-scale musical drama, “The Golden Mask Dynasty” (not included).

Continue your educational journey of China’s fascinating history with a stop at a Jade Museum to observe skilled artisans carve intricate designs. With more than four thousand years of history, jade stone in Chinese culture symbolises preciousness and beauty, and embodies the Confucian virtues of courage, wisdom and compassion. Before long, you will drive through the mountainous countryside to one of the top archaeological wonders of the world, the iconic Great Wall at Juyong Pass, an accessible and gentle stretch meandering over 3500 miles of China’s northern mountain ranges from the Yellow Sea to the Gobi Desert. Immerse yourself with an optional tour to experience life in ancient Beijing at a 700-year-old Hutong (narrow alley) and dinner with a local family still living in old courtyard-style houses (not included).

Day 4: Bullet Train from Beijing to Suzhou (B)

Today is your chance to become experts in Traditional Chinese Medicine, a 5000-year-old practice that incorporates herbal medicine, acupuncture, massage, exercise and dietary therapy. Based on the concept of a connection between mind, body and environment to prevent and manage diseases, elements of its natural and holistic approach are widely adopted in Western medicine. With your mind and soul at ease, travel on a high-speed bullet train to the harmonious city of Suzhou often described as the ‘Venice of the East’ for its classical gardens, palaces, canals and bridges.

China is the largest silk producer in the world and Suzhou is renowned for its exquisite quality silk. Today you can witness the delicate silk-making process from silkworm cocoons at the Silk Spinning Factory and testify that the handmade quilts are as light as feather. Then take a stroll in the world-famous Lingering Garden, featuring ornate viewing pavilions and a splendid landscape of water and striking rockeries. You have an opportunity to cruise along the Grand Canal (not included) to view life along China’s ancient waterway. Travel to Wuxi, the ‘land of fish and rice’, to conclude the day at famous Nanchang Street, an ancient thoroughfare showcasing the juxtaposition of traditional and modern living.

Gain an insight into China’s enormous manufacturing and production capabilities with a visit to a Pearl Factory to learn about freshwater pearls, a key export commodity with great cultural significance since the Han dynasty. Then take in the pleasant sounds at Li Lake Park, home to egrets and many rare species of birds, and the wonderful scenery of picturesque Taihu Lake, the second biggest freshwater lake in China. Top off your evening with a spectacular “Impression West Lake” show (not included) staged entirely upon the open-air of the West Lake with a backdrop of natural mountains and real water – a truly captivating artistic masterpiece of music, light and dance produced by the theatrical director of the 2008 Beijing Olympic Games’ opening and closing ceremonies.

Described by Marco Polo as ‘the most beautiful and magnificent city in the world’, Hangzhou is considered the tea capital of China. Learn how to make local specialty Longjing Tea at a tea house while immersed in the stunning natural scenery of the village surrounds. Then enjoy a small boat ride on the UNESCO-listed West Lake where you will see the ethereal beauty of Hangzhou’s willow-draped islands. Next, transfer to cosmopolitan metropolis Shanghai to visit the famous Bund, a five-block riverfront promenade of shops and commercial buildings. Modern mega high-rises on the east and traditional European-style architecture on the west are divided by the Huangpu River. Complete a memorable evening with the option to attend a spectacular Chinese acrobatic show, “ERA: The Intersection of Time” or “SPIRAL” (not included), widely praised as the best acrobatic show in Shanghai.

Today is free at leisure or you may join a Shanghai Day Tour with Maglev Train Experience (not included) to soak up Shanghai’s best sights including Shanghai Bazaar where you can shop for last minute souvenirs, the affluent streets of Xintiandi composed of old-style Shikumen residences and modern architecture, and the world’s fastest commercially operating train with a top speed of 390km/h. Last but not least, one of the best ways to enjoy the extraordinary evening scenery along the Huangpu River is to take a charming “Huangpu River Cruise” (not included).

Day 9: Fly from Shanghai to Australia (B)

Transfer to the airport for your onward journey.

Note: Some flights may arrive one day earlier.

Day 1: Fly from Australia to Xi’an

You will be greeted at the airport by a representative who will transfer you to the hotel. Marking the eastern end of the Silk Road, Xi’an is one of the ancient capitals of China, symbolic of ‘Eternal Peace’. Note: Some flights may depart one day earlier.

The highlight today is a visit to the Terracotta Warriors and Horses Museum followed by the Terracotta Warriors Reproduction Factory. Unearthed near Xi’an, the thousands of life-size sculptures of soldiers, chariots and horses are considered a world wonder. With different facial expressions and weaponry adorning each soldier, the Terracotta Warriors were believed to have been created to accompany the Qin Emperor into the afterlife. This site is among the top archaeological excavations of the 20th century and will leave you astounded by the sheer scale of the army. In the evening, enjoy an optional Imperial Dumpling Banquet and Tang Dynasty Singing & Dancing Show (not included).

Day 3: Bullet Train from Xi’an to Beijing (B)

Unearth the Small Wild Goose Pagoda, an AAAA scenic spot and World Heritage Site surviving from the Tang dynasty. Although built entirely of stone, the Small Wild Goose Pagoda is very delicate in appearance. The top three floors have been damaged, yet it really adds to the appeal of the pagoda. Later, travel to China’s sprawling capital Beijing on a high-speed train.

Day 9: Bullet Train from Shanghai to Yichang & Embark on the Yangtze River Cruise (B)

Transfer to the railway station for a high-speed train ride to Yichang, known as ‘Gateway to the Three Gorges’, an important trading port along the majestic Yangtze River. Then transfer to your Yangtze River Cruise ship.

Enjoy a shore excursion to Shennong Stream, a mysterious and narrow tributary famous for its picturesque scenery and announced a National AAAAA Tourist Attraction. All along the stream are signs of ancient Chinese civilisation and nature’s splendour characterised by steep ridges and peaks, massive caves, wildflowers, plank roads built along cliffs and ancient hanging coffins. Be prepared to take in the elegance of Wu Gorge and the beauty of Qutang Gorge, the defining highlights of your cruise. Optional shore excursion: White Emperor City (not included) – White Emperor City is an ancient temple that is located atop Baidi Mountain on the northern bank of the Yangtze River.

Escape to your final shore excursion to the Jade Emperor Scenic Area in Fengdu, a recently debuted shore excursion. The sacred site features a 100-foot-tall statue depicting the Jade Emperor, an important deity in Chinese Taoism, and more than 200 Taoist and Buddhist sculptures. You will be farewelled in the evening with a captain’s banquet. Optional shore excursion: Fengdu Ghost City (not included) – Fengdu Ghost City is regarded as the ‘City of Ghosts’. The temples built on Ming Mountain depict punishment instruments and demon paintings, demonstrating the Chinese people’s imagination of hell.

Disembark the cruise ship at Chongqing, known as the ‘Mountain City’ of China, and transfer to the airport.

Note: Some flights may arrive one day earlier.

ACCOMMODATION
Reference accommodation is subject to change depending on availability and travel dates. If the hotels or ships listed are unavailable, substitutes of a similar standard will be provided. Hotels are specifically chosen for your comfort in consideration of full and often long days and are generally not centrally located. All accommodation is self-rated in accordance to local standards.

Yangtze River Cruise tour extension is not available for dates denoted by a hat (^) Note that some flights may depart one day earlier than the departure date.
Note that surcharges may apply if booking is made within 90 days of departure

DEVIATIONS
A minimum break fee of $150 per person plus applicable airfare & tax difference may apply for deviations from set itinerary such as early arrival, stay behind or flight deviation requests.

OPTIONAL PROGRAMS
Optional programs are paid directly to the local guide on tour in the local currency. Please note that non-participants may have to wait for the group programs to conclude if alternative arrangements cannot be provided due to location or logistical constraints.

Prices are correct at the time of publication, are twin share per person, may change without notice & subject to availability. Restrictions & conditions apply. See website for full terms, conditions & travel dates. Prices quoted are on sale until 26 February 2020 unless otherwise stated or sold out prior. Seasonal surcharges & blackout dates may apply depending on date of travel.

Additional fees, including surcharges and visa fees specific to your departure date may apply. Payments made by credit card will incur a surcharge. Advertised price includes any bonus nights. Please ask us for further details or visit our website at www.flightcentreexclusives.com.au. Flight Centre Exclusives provides holiday packages offered by Ignite Holidays Pty Ltd & is a subsidiary of Ignite Travel Group. ATAS Accreditation No. A10345.

~Approved applicants only. Fees, terms, conditions & minimum finance amounts apply, incl $99 Annual Fee charged on the account open date and annually on the anniversary of that date. Annual Fee must be paid in full within 90 days or it will attract interest. Minimum monthly repayment required. Interest, (charged at the Expired Promotional Rate) payable on outstanding balances after any Interest Free Period. See skyecard.com.au for current interest rates. Only available at Skye retail partners. Credit provided by FlexiCards Australia Pty Ltd ABN 31 099 651 877 Australian Credit Licence number 247415. FlexiCards Australia is a subsidiary of FlexiGroup Limited. Mastercard is a registered trademark, and the circles design is a trademark of Mastercard International Incorporated.